Trades with Crackin' Wax, Foul Bunt, Get the Bat Off Your Shoulder, and $30 a Week Habit

The past two weeks have been good for cards in the mail!

Crackin' Wax sent me a package of Cardinals cards--but I'm ashamed to say I can't remember which ones. (I really need to start keeping track of my trades--sorry about that.)

William at Foul Bunt sent me three cards I needed for my 1990 and 1991 Topps and 1982 Donruss team sets, even though I had no cards he needed. Thanks so much, William!

I sent Anthony at Get the Bat Off Your Shoulder a few 2012 Topps cards to help him complete Series I and he sent me a few Cardinals to help fill my team set--thanks, Anthony!

Today, I received a bubble mailer filled with recent Cardinals cards from Robert at $30 a Week Habit. Almost all of them were ones I needed (the ones I didn't had just been bought at a card shop last weekend). Needless to say, I now have a head start on a few sets I didn't even know about.

Another favorite set is the Topps Heritage, of which I received a 2009 #507 John Smoltz (my first Cardinal card of him) and 2011 #223 Ryan Theriot. (I also received several other 2011's, though they were the ones I just got at the aforementioned card show.) 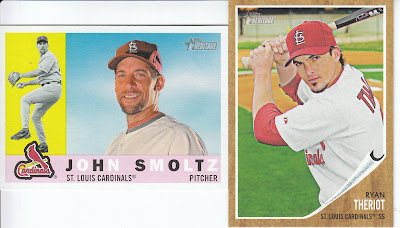 There were four 2009 O-Pee-Chee cards for #493 Yadier Molina, #568 Jason Motte, #215 Ryan Ludwick, and #587 Colby Rasmus. Call me old fashioned, but I like these cards: no gold, no gloss, no stamping of any kind. A baseball card like it was meant to be. These give me a great start on this Cardinals set!

Robert gave me a great start on a few sets, especially the 2011 Topps set, with nine cards--including this cool #121 of Chris Carpenter. 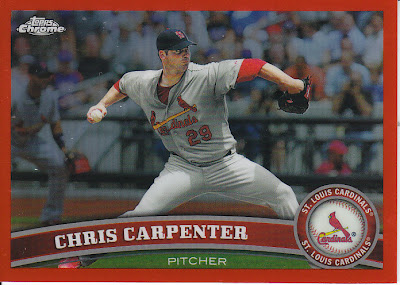 There were even a couple of the recently departed Albert Pujols. 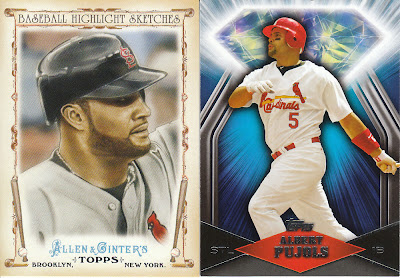 My take on the whole Pujols defection is: I was upset on the day it happened--because he could have ended his career in St. Louis, held many of the career batting records, and become a one-team franchise icon like Stan Musial and Bob Gibson. But then I was OK with it because he was given way too many years and way overpaid; he basically took the money and left. Still, he is arguably the greatest player of his generation and I can say I had a chance to interview him in his only season in the minor leagues before he became Albert Pujols. (I'll have to tell that story one of these days.) These were two nice cards!

One odd card Robert sent me was a 2011 Topps #57 Mark Trumbo. Who plays for the Los Angeles Angels of Anaheim. The team Pujols left St. Louis for. 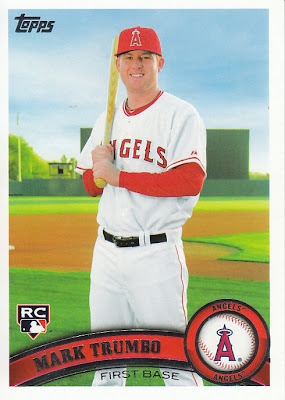 I'll take this as an honest mistake--both the Cardinals and Angels wear red, after all--and not a jab at a very sensitive spot in this Cardinal fan's heart. (wink)

Thank you to everyone for the trades! I've been writing this blog for less than a month and I already have several trades under my belt. If anyone would like to trade with me, please check out my want lists in the top left column of the blog. Thanks!

In this installment of Weird Card Wednesday, we look at Bernie Carbo's 1973 Topps #171 card. 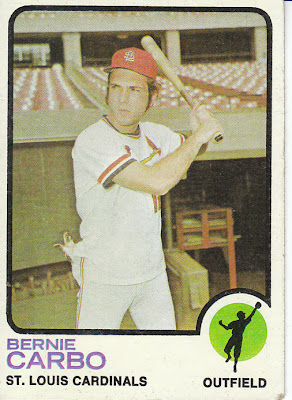 It looks like the Topps photographer failed to take a photo of Carbo down in Florida during spring training. So he shows up at Busch Stadium, walks into the Cardinals clubhouse, and asks Carbo if he would pose for a quick picture. Not having time to tuck his shirt into his pants, Carbo strikes a menacing batting pose beside the dugout. Surely the graphic designer back at Topps corporate will crop the photo above the waist, he thinks.

My Weekend: First Card Show in 20+ Years and Visit to Cards-R-Fun

On Saturday, I went to the Middle Tennessee Sports Card Show in Nashville, my first show in over 20 years. It wasn't a large show--only nine dealers, I think--held in a small gymnasium, but I did come away with some Cardinals cards and a great start on 2010 and 2011 Topps Heritage team sets. I also discovered some cards I'd really like to start collecting: the 2010 Topps Vintage Legends.

I love these cards! Jackie Robinson on a 1976 Topps design...Thurman Munson as a '59 card...Jimmie Foxx on an '86 card! I think they're really cool and even though they're not Cardinals, I'd like to finish the set.

I did OK on my spending at the show ($24)...but then I stopped by Cards-R-Fun about five minutes down the road. What started out as "just a few minutes" became four hours! (If you've ever been to this store, you'll know why.) It's a great place to find tons of commons, but man, it's disorganized! I went with the intention of finding some Topps Heritage Cardinals--and a found a few from different years--but you have to search through boxes that contain multiple years and sets. You pretty much have to dive in and find whatever cards you've never seen before. When it was over, I had 150+ cards and a $33 bill. Yikes! There goes my card budget for March.

Overall, it was great to go to the show and one dealer from whom I bought most of my cards said he would bring more Cardinals for the March show. I only wish there had been more dealers to choose from.